SUPER BOWL-ING FOR DOLLARS: WHICH PATRIOTS & FALCONS WILL INFLATE THEIR ENDORSEMENT EARNINGS?

No alternative facts can refute that Super Bowl LI was the most watched event of the year. With a TV audience of over 111 million, and another few million watching online, it was an unparalleled opportunity for the Big Game’s players to make an impression with fans and marketers.

Winning Patriot players will score a little over $100K in bonus money, plus a shiny new ring worth around $50K. But the real dough is in the national ad deals, appearance fees, autograph charges and other off-the-gridiron earnings that Super Bowl superstars can rack up.

So which New England and Atlanta players, if any, have enough game to make it big on Madison Avenue? Who’s going to land the talk show appearances, video game covers, cereal box spots, “I’m going to Disney World” cameos, Dancing With The Stars guest spots, and namesake fast-food sandwiches?

Here’s how this expert rates the endorsement talent:

Tom Brady.  With his record-setting 5th Super Bowl ring and 4th MVP award, Brady made a strong case for GOAT honors. And for those only watching the game for the ads, his performance for Intel was solid.  Though not an aggressive seeker of ad deals, Brady still manages to lead the NFL’s active players (now that Peyton’s retired) with nearly $10M in off-the-field income from sponsors including Under Armour, Uggs, Beats By Dre, and TAG Heuer. And while he’ll never match Manning’s goofy, guy-next-door appeal, Brady has been loosening up and having more fun in recent ads—consider his Uggs spot with Jeff Bridges, and his Under Armour sleepwear videos. On the upside, Brady’s got the looks, the rings, the charisma, the supermodel wife, and a proven resume as a high-return product pitchman. On the downside, there’s Deflategate, playing for the polarizing Pats, and a friendship with Trump that could erode his fanbase. Nonetheless, Brady has the bod for a Hanes briefs campaign, a perfect smile for a Tom’s Toothpaste deal, and a chin cleft worthy of a Gillette razor torture test. And we’re still waiting for a Chiquita banana ad headlined “The Brady Bunch.” Plus, as a family man, he could qualify for a minivan deal. His postgame tears deserve a Kleenex demo, too. At age 39, Tom is nearing the end of his career, but he’ll certainly remain a compelling pitchman after retirement, much like Joe Montana. He could easily add another $3M to his annual endorsement portfolio, if he so desires. But if you really want Brady, bring a seven-figure checkbook, a product he can invest in, and a contract that doesn’t demand too much of his time. And bear in mind that a recent fan poll had him ranked as both the most liked and most hated QB in the NFL. 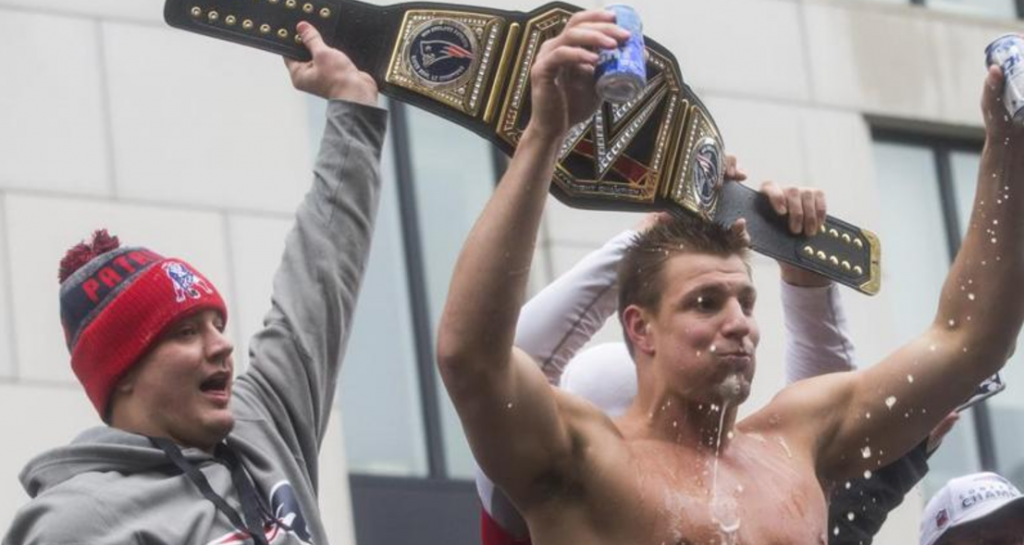 Rob Gronkowski.  Gronk’s so big, he didn’t even have to play in Houston to score ad deals. He was the first player to not see a second of action for his Super Bowl team, yet still star in Super Bowl ads. Not just one, but two: for Tide and T-Mobile. He also has deals with VISA, Nike, Monster Energy, Dunkin’ Donuts, Oberto beef jerky and EA Sports. He also has his own cereal, hosts a kids’ show on Nickelodeon, is producing and starring in a new web video series, and has a role in an upcoming film, American Violence. No wonder he can say that he lives off his endorsement earnings and bankrolls all his NFL pay. With the Patriots expected to be a strong Super Bowl contender next season, and Gronk fully recovered from injury, he’ll continue to be in big demand as a pitchman. It’d be fun to watch him do his Gronk Spike on a Timex watch to see if it really “takes a licking and keeps on ticking.” Or going one-on-one against Mr. Clean in a sexy housecleaning battle. As one of the NFL’s most iconic and recognizable characters, Gronk is a fun choice for any product that promises a good time—video games, snack foods, sports cars, condoms.

Julian Edelman.  Edelman’s amazing fourth-quarter catch will go down in Super Bowl history, and might even land him a deal with Super Glue. He’s already appeared in an “I’m going to Disneyland” spot (following Super Bowl XLIX), has his own JE11 brand, and most importantly is dating supermodel Adriana Lima. Given his versatility—he catches, passes, plays on special teams and has even played some defense—he could qualify for versatile products like SUVs, cough/cold/flu remedies or baking soda. And his excellent playoff beard qualifies him for any men’s grooming product, or a Gillette demo.

James White.  Every Super Bowl seems to have a player who emerges from anonymity to excel. James White is that guy for SB51. With a record 14 catches for 110 yards, plus 3 TDs including the game-winner in OT, he earned the “I’m going to Disney World” honors. But unless White can maintain his greatness over another season or two, going to Disney World may be as far as he goes with national advertisers.

Julio Jones.  A player whose talent exceeds his personality. Arguably the game’s best WR, Jones made some great plays in Houston, but not enough to grab a ring. Until then, he won’t ring up major endorsements.

Martellus Bennett.  A player whose personality exceeds his talent. Marty’s made the most of his 15 minutes of postseason fame: pom-pom dancing after the AFC Championship, saying he won’t visit the White House with his victorious Pats’ team, suggesting Migos should’ve replaced Lady Gaga for the halftime show, calling himself the “Black Dr. Suess.” Team him up with brother Michael, who won a ring with the Seahawks in Super Bowl XLVIII, in a bling-off for Josten’s.

Bill Belichick.  Seven Super Bowl appearances as a head coach—and still few endorsements. His dour, surly, unemotional persona is exactly the opposite of what marketers are looking for in a pitchman. But if you could film him getting visibly excited about your product, it’d be worth seven figures. Or how about showing reporters at one of his pressers, downing No-Doz, Red Bull or 5-Hour Energy?

Dan Quinn.  After that excruciating defeat, the Falcons’ head coach now qualifies for a Maalox Moment ad, or a Southwest Airlines “Wanna get away?” spot

Danny Amendola.  Like most of the Pats’ receiving corps, no superstar. But good looking, speaks well, dating Miss Universe 2012, and just won his second ring. Worthwhile choice to demo the AXE Effect.

Stephen Gostkowski.  Extremely rare to see a placekicker in a national ad, but Gostkowski made it into a Pepsi spot that ran during the playoffs. It will likely be the highlight of his national endorsement career.

Malcolm Butler.  The hero of Super Bowl XLIX and a solid performer in Houston, Malcolm could work in any product demo ad with the headline: “The Butler Did It.”

Alan Branch.  Put him in an Office Depot ad, setting up his Branch office.

Barkevious Mingo.  Made the move of the year: going from the lowly Cleveland Browns to the Patriots in the preseason. Good choice for a moving company like American Van Lines. Or try Barkevious in a pain relief ad for Aleve-ious.

Matt Bryant.  At 41, Atlanta PK was the oldest player in Houston.  Of possible interest to Ben-Gay, Metamucil, or Advil.

Tevin Coleman.  Overcame premature birth and the sickle cell trait to play in the Super Bowl.

Chris Hogan.  Overcame four years of lacrosse to play in the Super Bowl.

Matt Ryan.  Ryan stood to gain the most from a Super Bowl win, but it was not to be. With a reputation as a QB who can’t quite get it done, Matty Ice desperately needs a Super Bowl ring if he wants to score deals with makers of ice cream, iced tea, or any product served over ice.

Michael Floyd.  Very embarrassing DUI caught on video last December; passed out behind the wheel at a stoplight, car still running. Not a wise choice for any automotive brand. Or any other brand, for that matter.

David Andrews.  Centers are never the center of attention.

Robert Alford.  82-yd. pick 6 against Brady will be the highlight of his career.

Malcolm Brown.  What can Brown do for you? Not much.

Ayodeji Olatoye.  Too hard to pronounce.

Grady Jarrett.  Three sacks on Brady, but none when it really mattered.

Devonta Freeman.  Didn’t get handed the ball when it really mattered.

Brian Poole.  Everyone out of the Poole.