Play ball! Live from Scottsdale, AZ via telecast to the Giant screen at AT&T Park in SF.

By: Brian Bacino
To celebrate opening day — (in March!) Baker Street invited the makers of the 2014 SF Giants Advertising Campaign to come together and view the TV commercials, outdoor, and online assets from the luxurious Champions Suite at AT&T Park.  And of course watch the Giants opener against the Diamondbacks live from AZ on the Giant screen. The game turned out to be an instant classic as the Giants clawed back from a 4 run deficit and Buster Posey hit a 2 run dong in the 9th to win it. The campaign seems destined for the same instant classic fate, thanks to the tremendous collaborative efforts of Clients, Writers, Art Directors, Photographers, Directors, Producers, Players, Coaches and Fans.
All Together Stronger Together
Click below to watch the spots. 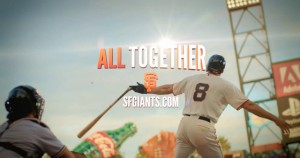 About the campaign:
The San Francisco Giants thrive on the energy and inspiration provided by baseball’s best fans. This energy along with a selfless commitment from all 25 Giants players(40 expanded) has produced 2 World Series Championships and created a ball park experience like no other. This unique player – fan relationship, this genuine power of togetherness, is what the 2014 SF Giants campaign is all about: All Together. Stronger Together. 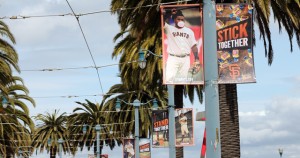 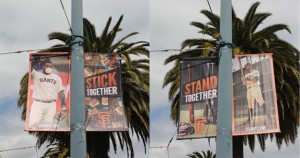 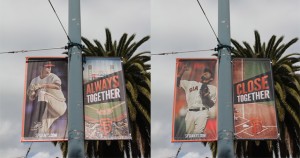 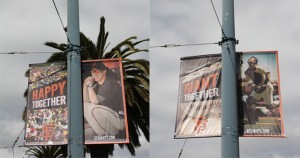 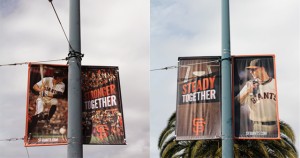 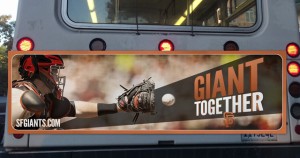 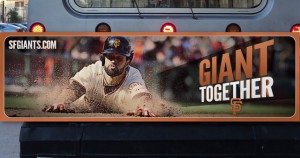 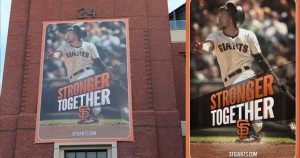 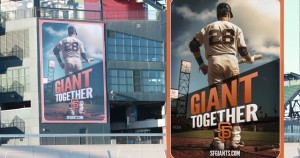 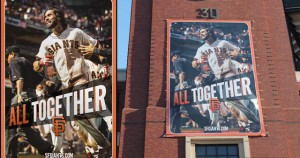 From the Desk of Intern Kirk: Exploring AT&T

Monday was a convenient day to post my blogs from last week, as most of the office was organizing the trip up north that a few employees will embark on tomorrow. With a few technical malfunctions and difficulties behind me, I successfully posted blogs three and four onto the web page. Next internet sensation? Ill let you decide, but all I can say is watch out Psy.

Once the blog work was done and dusted, I continued brainstorming ideas for the upcoming spot with Matt Cain and Angel Pagan. I havent been told if there is a direction this ad is supposed to take, or if there is a certain goal BSA wants to achieve with it, but Ive been taking multiple approaches in my ideas. Well have to see what B2 thinks of the rookies ideas.

END_OF_DOCUMENT_TOKEN_TO_BE_REPLACED

Creative Intern Kirk, From the Desk of the Intern, SF Giants

From the Desk of the Creative Chief: Giants Opening Day

Wow, another opening day as World Series Champions.  What an impossible ride our beloved San Francisco Giants have taken us on.  This current band of championship characters, who came of age in the post-Bonds era, has given this city so much excitement, so much torture, so much magic. Not to mention 2 parades in 3 years.

The Giants have taught a new generation of baseball fans what it means to play as a team. And to never give up. To play for the guy next to you, instead of playing for yourself. This team symbolizes a rather old school notion that the team is bigger than the superstar. That is something that I, as a die hard Barry Bonds fan*, came to respect as the the ultimate truth. Something I hope our Southern California rivals learn the hard way.

And so to kick off the season we wanted to show a highlight reel of the best TV spots this current group of Giants has done.

We begin in 2008 with a then unknown Matt Cain, and newly acquired Aaron Rowand. The Giants did not think their rookie phenom, Tim Lincecum was ready yet for the marketing limelight. 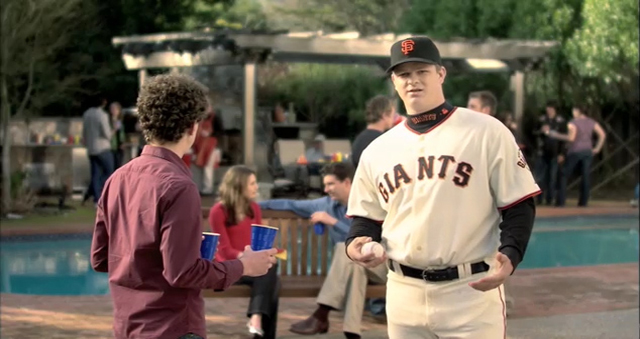 In 2009, the Giants felt comfortable enough to let the Cy Young award winner get involved in the fun. Enjoy the original short hair and the beardless Brian Wilson. 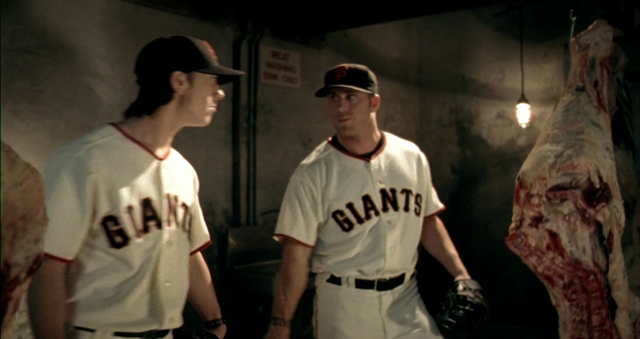 2010 was pure magic and so was the advertising featuring slow motion Giants magically talking to the viewers. 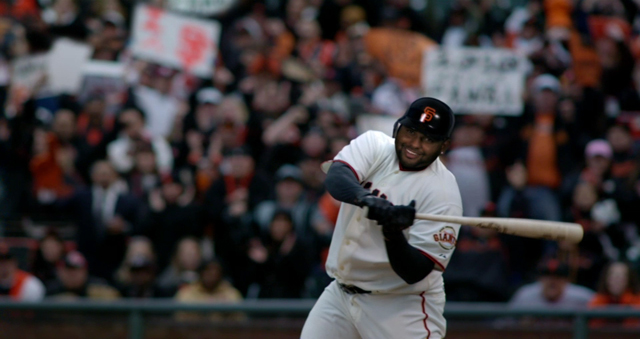 In 2011, the organization launched the Together We’re Giant theme as a tribute to the best fans in baseball. That theme has continued today because it is so ultimately true. 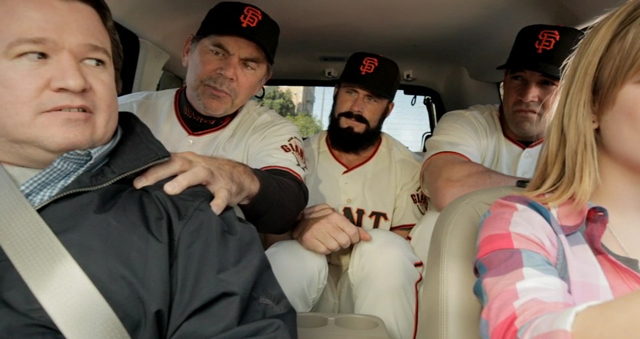 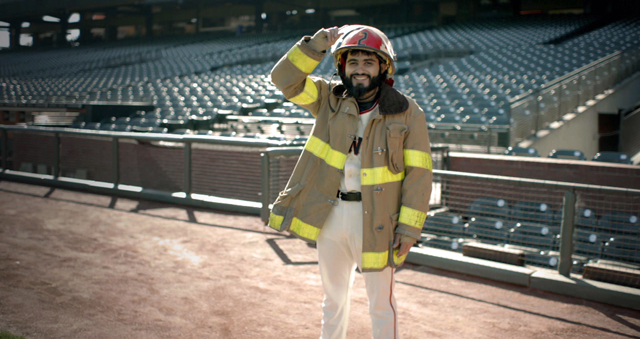 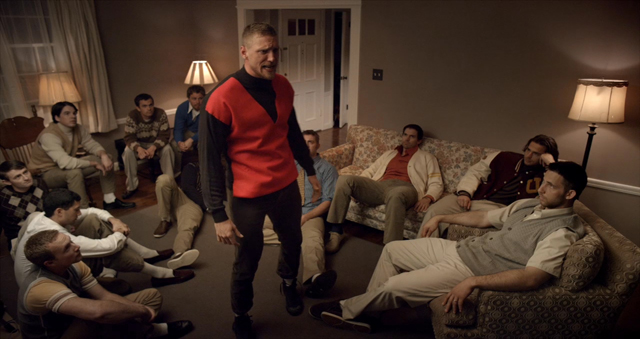 My journey to becoming a Giants fan started, ironically, with Roberto Clemente, the legendary Pittsburgh Pirates icon. I grew up in Dover Delaware, which is equidistant from the Baltimore Orioles and the Philadelphia Phillies. They were the hometown teams. Those were the teams my father loved. But the coolest kid in our neighborhood was Carlos Villa. He was a few years older than me, he played soccer and basketball, got all the girls, and his Dad was the junior high Spanish teacher. Well Carlos loved Roberto Clemente and the Pittsburgh Pirates. So even though my Dad was a Philadelphia Phillies fan, I became a Pirates fan. That was my form of rebellion. The National League East always came down to the Phillies and the Pirates which made for an excellent Father/Son rivalry.

That fandom served me well in the 70’s.  Especially when Willie Stargell and Dave Parker brought the Bucos back from a 3-1 deficit to win the 1979 World Series over the Baltimore Orioles. That was the first time as a fan I ever felt the thrill of coming back from the near dead to take it all. Last year’s improbable Giants run through the playoffs with 6 elimination games brought those memories roaring back.

When rookie Barry Bonds came to Pittsburgh and seemed destined to be the second coming of Willie Mays, I became the worlds biggest Bonds fan. I will still defend the man, forgive his notorious attitude, and argue he was the best player we’ll ever see regardless of steroids.

In 1989 a job brought me to San Francisco from New York. I arrived just in time to watch my beloved Pirates playing below .500 (again) and the two local teams were battling it out in the Bay Bridge World Series.  Of course the 1989 Earthquake stole all the thunder from that one sided Oakland A’s affair. Nevertheless, as a baseball fan I was happy to go to Candlestick and the Collesium and as long as the Pirates were not in town, I rooted for the home team.

Then Barry came to San Francisco! And he lit up baseball with 5 tools long before he took assault on the home run records. Watching Barry Bonds take over a game with his bat and speed was the most fun I ever had watching baseball up to that point.  The playoff run to the world series in 2002 with Dusty Baker’s kid being swept up in the arms of JT Snow will never be forgotten.

So it was bittersweet that my first professional experience with the Giants came after Barry. After the Giants had become faceless, nameless, non-contenders. But at the same time watching this team come together and grow and play for each other has been a more rewarding experience than watching my hero Barry Bonds pound balls into McCovey. And the 2 parades in 3 years weren’t too shabby either.